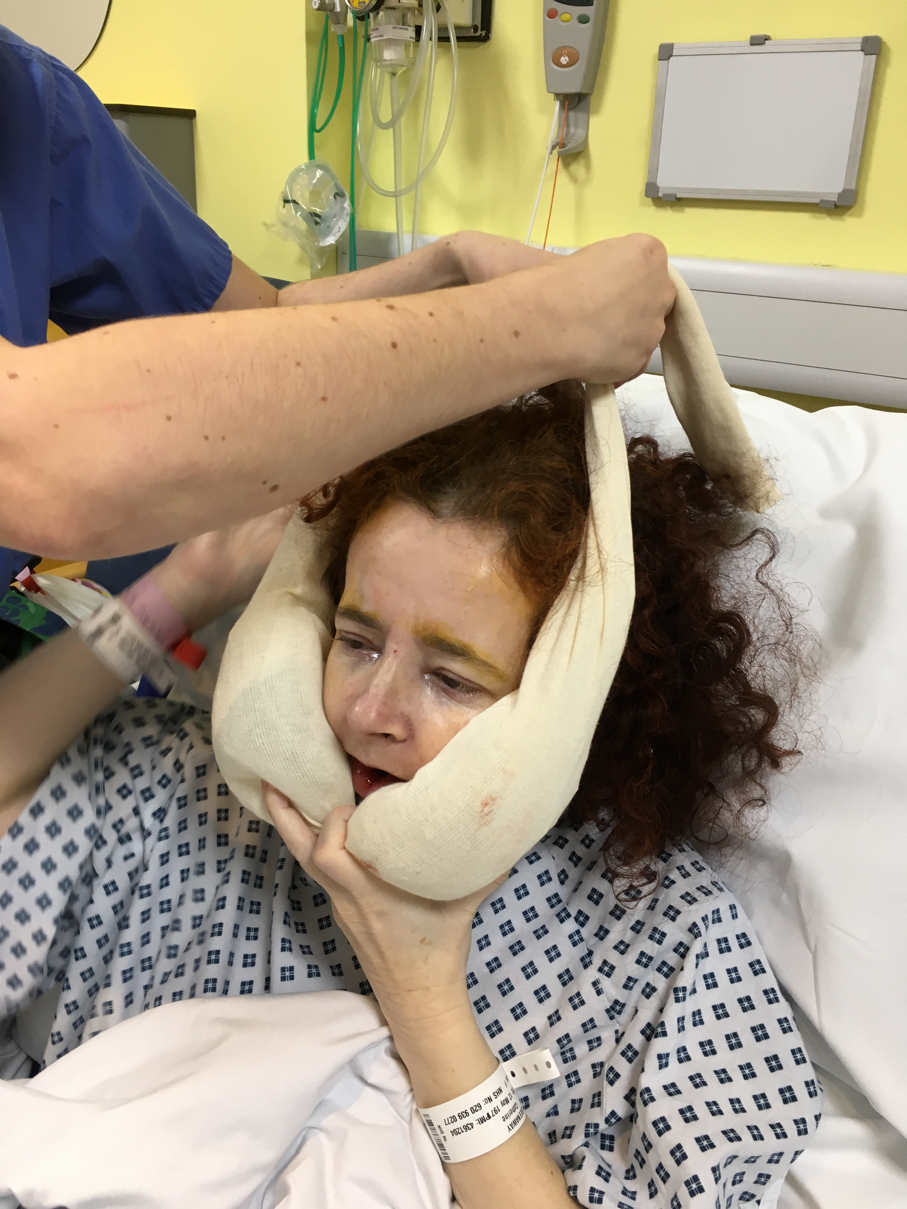 So double Jaw surgery went ahead on the 8th December as planned. I spent most of the day in theatre and the evening back on the ward where Michael was waiting for me. And the day after, Saturday, all the children came in to see me which was rather sweet. I spent that night in hospital too and arrived home on Sunday night still completely worn out! 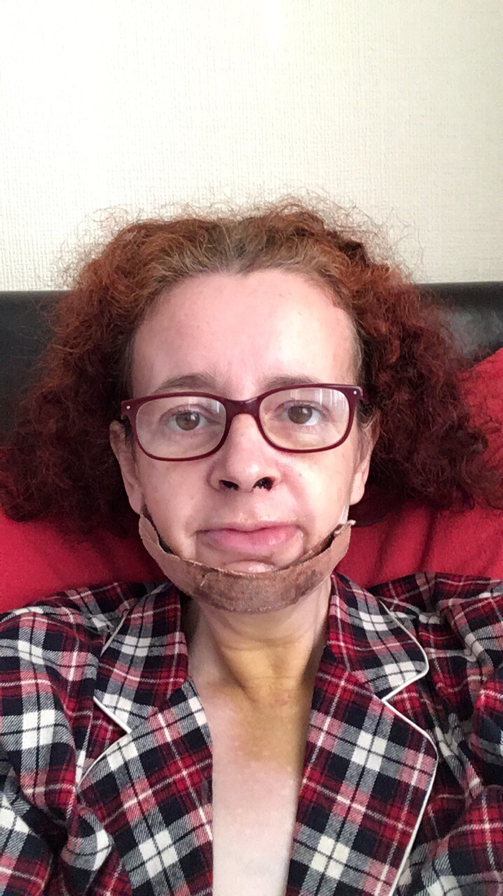 I took the above photo when I began to really feel human again, just before I lost the chin strap.
Mary aged 9 had been making notes on her phone and I thought I would share them with you here. She did a good job of blogging I think ....
Mummy's jaw surgery at christmas!
13th of December 2017. Mummy has had jaw surgery. On fifth day now. She is better than she was in hospital. Finding it quite hard to breathe through her nose. She feels hot, tired and painful. She can go  to the toilet and drink and get dressed! Mummy is doing well. She can walk around a bit. She is wearing pyjamas at the moment. Mike is feeding her with a syringe. The dog has to be gentle to mummy. Mike is being very protective over mummy. The Christmas tree is up and ash is itching himself all over. Ash respects mummy. It is 6:39 and mummy is having some pain killers. Mummy just coughed a little and she burped. She doing ok now.  We are going to spend some family time with her before we go back to dad's house. I am changed so I can spend some time with mum.
14th of December 2017.It is now day six and mummy is better at talking than she was. I came over earlier and she took her painkillers. She managed to eat Christmas cake blended with cream cheese and soya milk! She is having soft carrots for dinner tonight. She's slowly getting better. We are going to see the surgeon who did the surgery on Monday next week. We hope the surgeon will think that mummy is recovering well.
Day 7. 15 December 2017 and mummy  can very very very slightly smile! She looks so so so so so so so good now. Mum is gradually getting better every day. One step at a time. Her nose is still clogged up with old, dry blood. Mummy has taken the plaster from her Chin and she looks so so good. She's normal but a bit swollen.
It is the tenth day of jaw surgery (18th December 2017) and mummy's nose is clear! Mummy managed to syringe in some soup. Mummy put cheese in he container and melted the cheese then mummy put milk in it and stirred it in. Then mummy blended the soup. It is 1:10pm and mummy is feeling exhausted and she doesn't feel like talking.
Day 12 of jaw surgery. Wednesday 20th of December and mummy is feeling sad that she can't have all the Christmas chocolates. She is making soup for dinner. It is a vegetable soup. With goats cheese in it. We have more crackers from Michael and Joy. We now have twelve crackers! It's getting exciting!
The 13th day of jaw surgery! The 21 of December! 4 days to go until Christmas Day! Mummy is able to drink out of a cup! The orthodontics tightened mummy's elastics.
14th Day of jaw surgery! 22nd of December.  Nearly Christmas.
And then Christmas just sort of happened and I recover, one day at a time!

Well it’s been some time since I blogged about the jaw and teeth, since I went from April to November in limbo, being surgery ready and waiting for THE DATE along with jaw buddies of mine in a certain Facebook group. 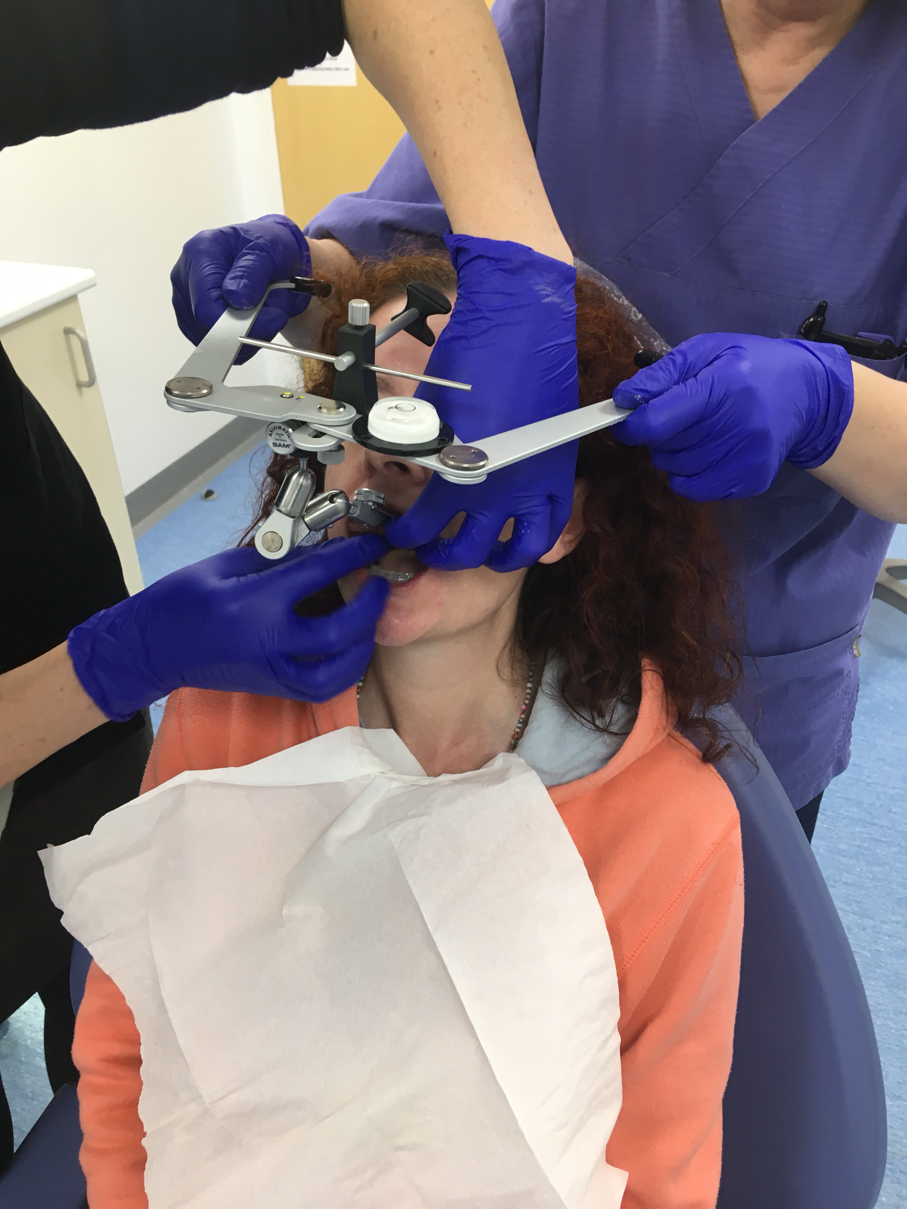 Then it all began to happen. I got the surgery date, and I went to several appointments in preparation. There’s one on Monday with the surgeon too. That should be proper interesting. 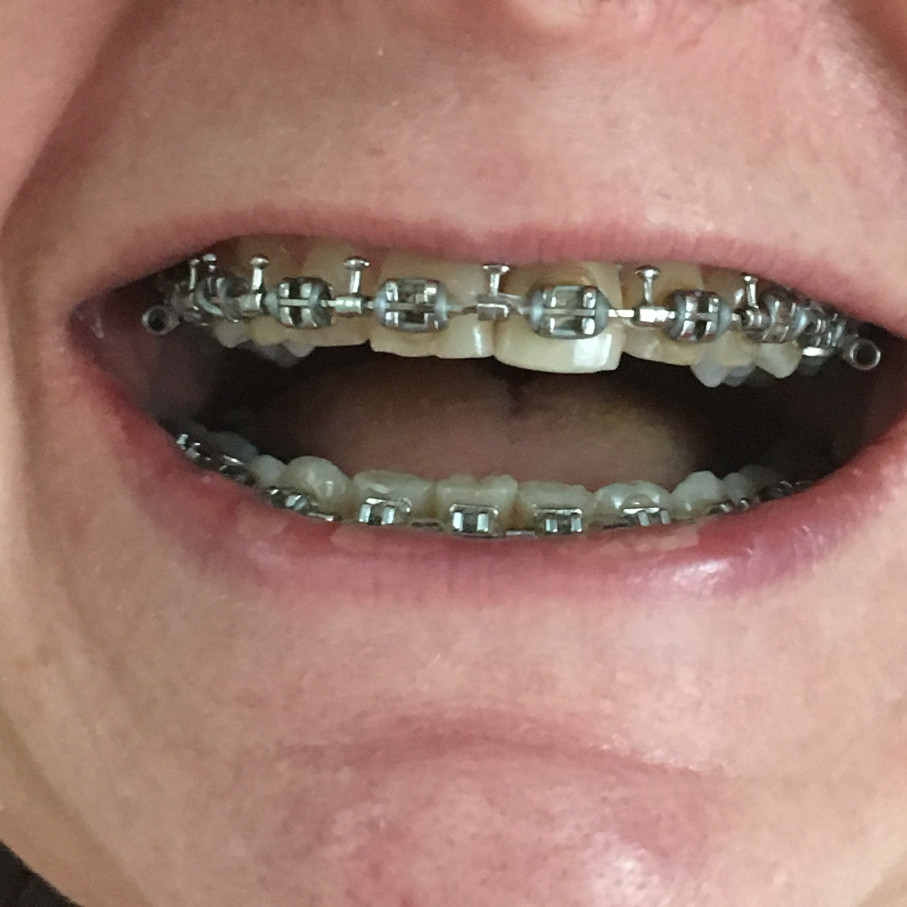 And these bad-boys were fitted, surgical hooks to create more mouth ulcers and facilitate wiring during the actual op. They are on the bottom teeth as well, pointing downwards! 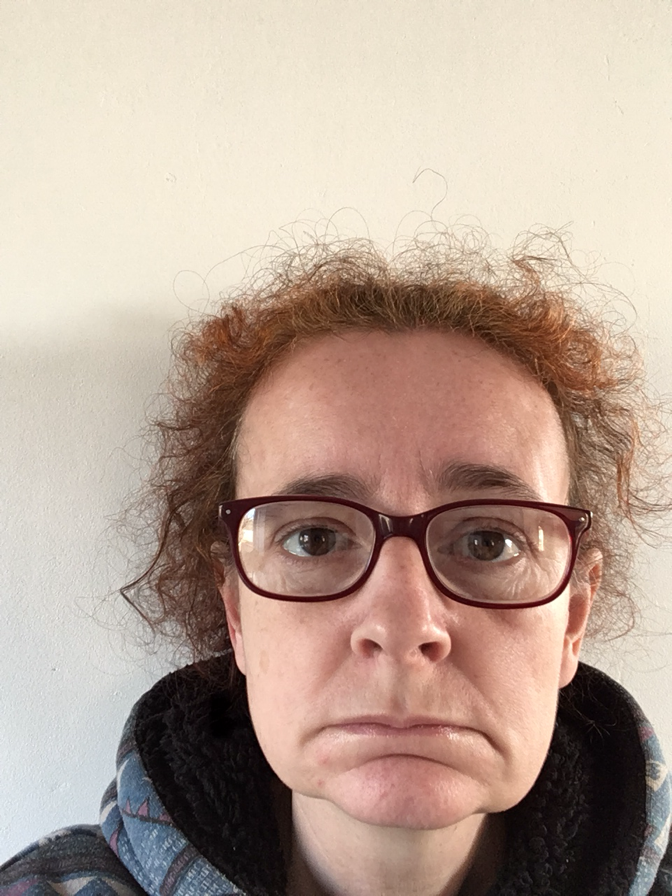 So today, with one week to go, I’ve taken a selfie for you. I normally compensate for my bite, but here I’m hiding nothing and have bitten together to show you my actual pre surgery face. I don’t look like a fun, inventive creative person from this picture. That’s why I mostly show you my stuff, or my cute kids.
But here I am, for the record. Next Friday will see me under the knife. Hammer. Well, however they separate jaw bones, I do not really want to know. Eeeep!