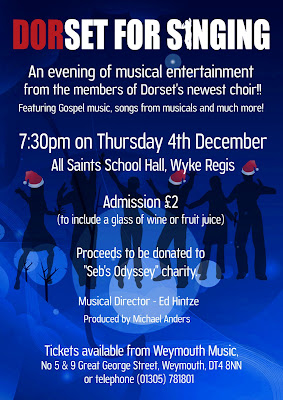 wow
didn't we do well ... well i thought so anyway!

last nights concert to raise money for sebs odyssey played to a full school hall, and i think we even ran out of wine. there were songs from the choir and lots of solos performances too, including mine ... i did fantasise about sneaking out of the back door just before it! we heared some more about the starlight foundation, and more about seb green, who is nearly home! We raised a fantastic £793.17 for Seb's two charities.

i followed Maggie singing 2 songs, and didn't look at Steve before i went onto the stage. i can feel the nerves again writing about it! anyway - i opened my mouth and out came my song, and i thought it sounded ok too! it was worth trying to keep my solo secret for the huge grin on Steve's face as i left the stage again ... at last he understood why i wouldn't eat any dinner!

co-director Michael amazed us by leaving his place at the computer and taking the stage for a solo of his own. He got lots of cheers! He also sang most of the choir songs with us, but if you come along to our practices, Michael is there playing videos of new songs to sing, and making sure the words are correct. if you cant see the screen you can also have an instant print out, all with a few clicks of Michael's mouse...

Ed treated us to a few songs, even if he is quite famous and has performed live on the BBC!

next choir meeting is not until January the 15th ... would anyone like to come to my house and sing? i don't know if i can wait that long!!!
Posted by Raggy Rat